Home/desktop/Facts About Winter Chinook
Previous Next 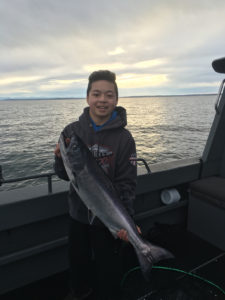 The holiday celebrations are in the rearview mirror and it’s time to look at winter chinook fishing options, including a few that began this month.
Central and south-central Puget Sound and Hood Canal (Areas 10, 11 and 12) are now open for winter hatchery blackmouth – a term used for a chinook’s dark gum-line. Area 10 is open through March 31; and Areas 11 and 12 are open through April 30.  “There wasn’t a lot of bait around in Area 10 when it was last open (fishing closed on Nov. 12) although we managed to release some bigger sized blackmouth,” said Justin Wong, owner of Cut Plug Charter in Seattle. “We didn’t catch a lot of shakers (chinook under the 22-inch minimum size limit) so that is a good thing.”  Lastly, consider getting out sooner than later since early closures hinge on catch guidelines or encounter limits for sub-legal and legal-size chinook (fish over the 22-inch minimum size limit).  In central Puget Sound look for blackmouth at Jefferson Head; West Point south of Shilshole Bay; Point Monroe; Fourmile Rock; Rich Passage; Southworth; Manchester; northwest side of Vashon Island by the channel marker; Yeomalt Point and Skiff Point on the east side of Bainbridge Island; and Allen Bank off Blake Island’s southeastern corner.  In south-central Puget Sound try around the Clay Banks off Point Defiance Park in Tacoma; the “Flats” outside of Gig Harbor; Quartermaster Harbor; Point Dalco on south side of Vashon Island; Southworth Ferry Landing; and Colvos Passage off the Girl Scout Camp.  Hood Canal doesn’t garner as much attention in the winter but don’t underestimate what can be a decent fishery off Misery Point, Hazel Point, Pleasant Harbor, Toandos Peninsula, Seabeck Bay and Seal Rock.  Southern Puget Sound (Area 13) open year-round for hatchery chinook is another overlooked fishery. Good places are Fox Point; Gibson Point; Point Fosdick; Hale Passage; Anderson Island; Lyle Point; and Devil’s Head and Johnson Point.  Other choices on the horizon for winter chinook are the San Juan Islands (Area 7) open Feb. 1 through April 15; northern Puget Sound (Area 9) open Feb. 1 through April 15; and the east side of Whidbey Island (Areas 8-1 and 8-2) open Feb. 1 through April 30.

Oldest salmon derby gets underway
The Tengu Blackmouth Derby – the oldest salmon derby that began prior to and shortly after World War II in 1946 – is held on Sundays 6 a.m. to 11 a.m. starting Jan. 5 through Feb. 23 on Elliott Bay at the Seacrest Boathouse (now known as Marination Ma Kai) in West Seattle.  In previous years, the derby started in October when Area 10 opens for winter hatchery chinook. However, this year’s non-retention of chinook delayed the event to coincide with the Jan. 1 opener. Last year, the derby was cancelled when WDFW decided to shutdown Area 10 just a few weeks after it began.  What makes the derby so challenging is the simple fact blackmouth are scarce around the inner bay during winter months.

The derby is named after Tengu, a fabled Japanese character who stretched the truth, and just like Pinocchio, Tengu’s nose grew with every lie. In a typical derby season, the catch ranges from 20 to 23 legal-size chinook and has reached as high as 50 to 100 fish although catches have dipped dramatically since 2009. The record-low catch was four fish in 2010, and all-time high was 234 in 1979. The last full-length season was 2017 when 18 blackmouth were caught and a winning fish of 9 pounds-15 ounces went to Guy Mamiya. Justin Wong had the most fish with a total of five followed by John Mirante with four fish.
It has been a while since a big fish was caught in the derby dating back to 1958 when Tom Osaki landed a 25-3 fish. In the past decade, the largest was 15-5 caught by Marcus Nitta during the 2008 derby. To further test your skills, only mooching is allowed in the derby. No artificial lures, flashers, hoochies (plastic squids) or other gear like downriggers are permitted. The membership fee is $15 and $5 for children age 12-and-under. Tickets will be available at Outdoor Emporium in Seattle. Rental boats with or without motors are available from 7 a.m. to 11 a.m.

About the Author: Lisa Berry